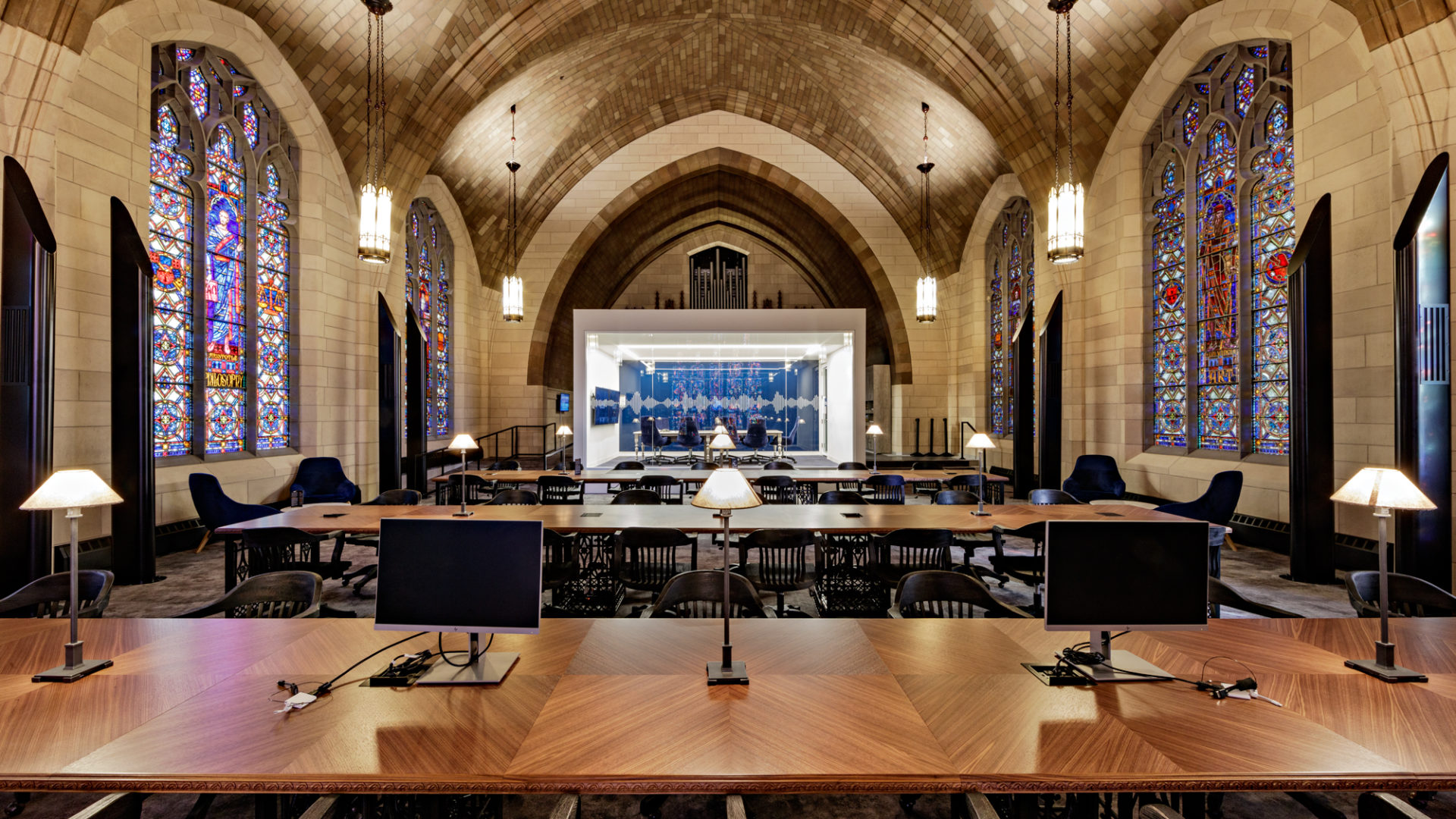 An insight by Charlie Spector

You don’t really notice it at first.

Whether you’re heading directly from Newark Broad Station or walking over from Audible’s main headquarters at 1 Washington Street, Audible’s brand new Innovation Cathedral doesn’t appear to stand out amidst the rise of new and renovated buildings clustered in Downtown Newark.

That is, until you see it up close for the first time.

Originally opened in 1933 for a congregation that had been active since 1811, the Second Presbyterian Church sat on the corner of James and Washington in the heart of Newark. Second Presbyterian operated the property until it shuttered in 1983. After brief stints for other industries, it became vacant in 1995 and remained vacant for  over 20 years. 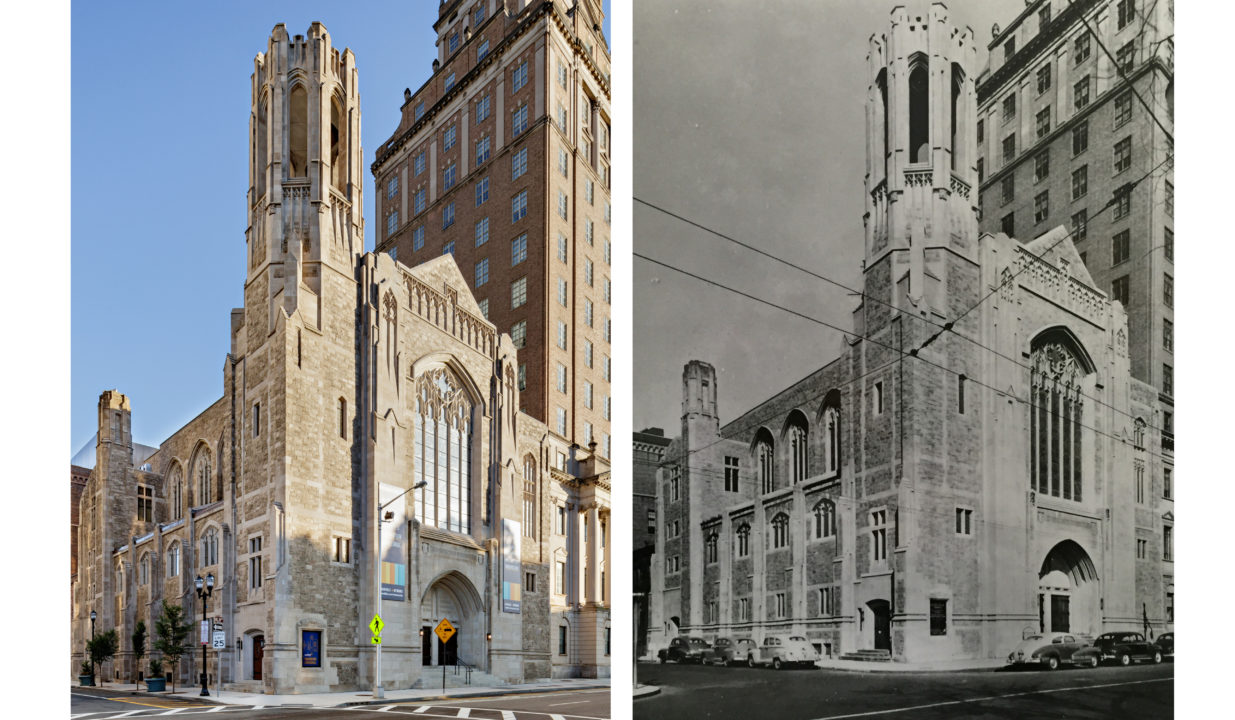 In 2016, Spector Group partnered with Audible to restore this historic, land-marked piece of Newark’s history and re-imagined the space for over 500 of its finest technologists.  The building formally opened last month after nearly four years of extensive exterior and interior restorations that required the building of a multi platform interior endoskeleton to compliment the land-marked façade.

Audible’s impact is not exclusive to the church proper. Two adjacent buildings—Hunter Hall and a former community center next door—have also been co-joined into an expansive, horizontal campus combining historical architecture with the latest in modern architectural advances to not only preserve an historic space but also to activate it for Audible’s technologists allowing this Newark-based company to continue to expand its outreach into the community.

Unlike a traditional church, the existing front doors that face Washington Street no longer constitute the main entrance. Instead, these doors open outwards daily allowing the eastern light to flood the main level of the new office space.

The Innovation Cathedral’s main entrance is now on James Street at Hunter Hall, the centerline of the three building campus. To the west of Hunter Hall is The Auditory, which will be used for live readings and various community events. The seats around the stage’s former proscenium have been replaced with an open plan flexible work space, with the balcony also preserved for this purpose. 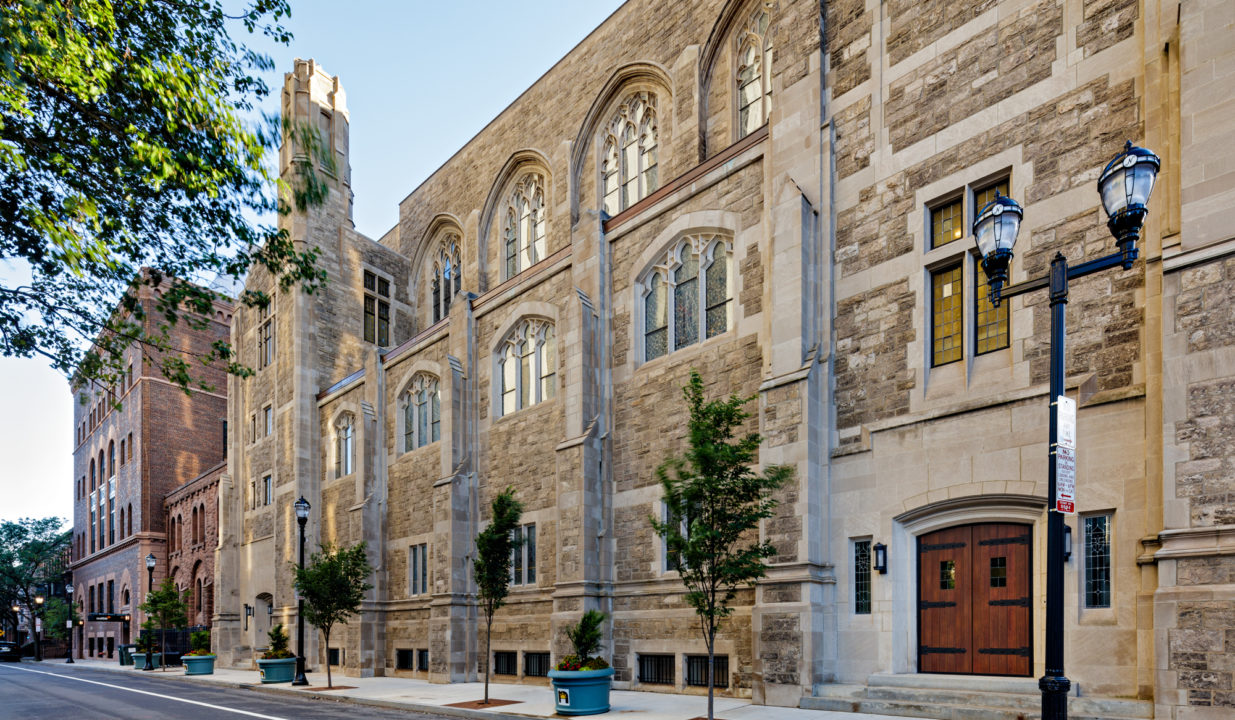 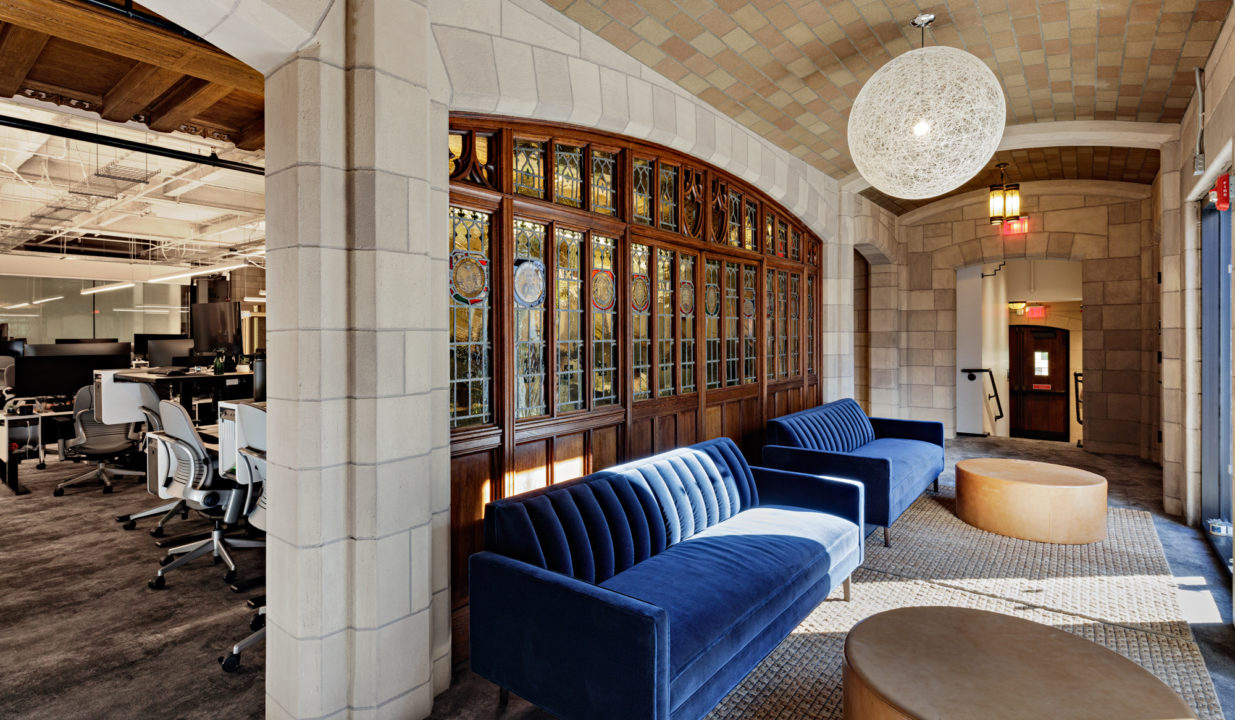 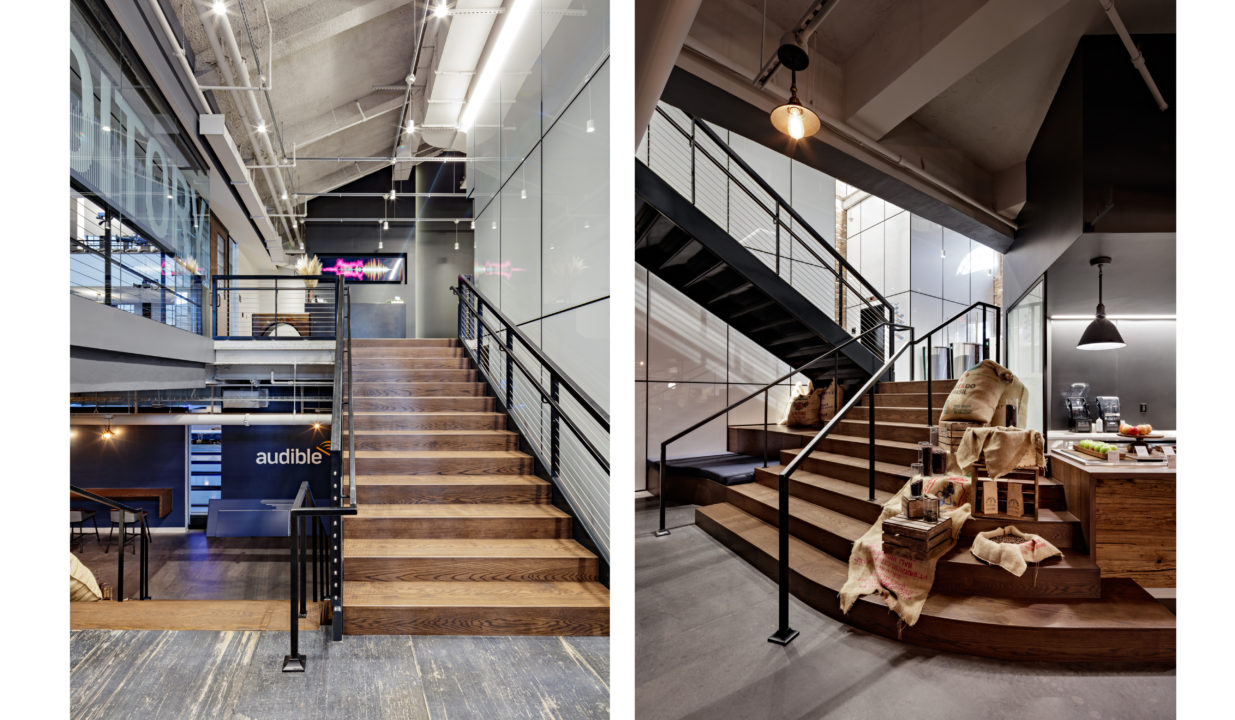 As you head east into Hunter Hall, the space is divided into a new dug out lower level and upstairs portion. When you descend, you’re flanked on either side by both a café where staffers can get morning coffee as well as a full-fledged commissary for all times of the day. These communal hubs are flanked by in turn by Audibowl, a fully operational bowling alley that was restored and itself a staple of the original Second Presbyterian community. 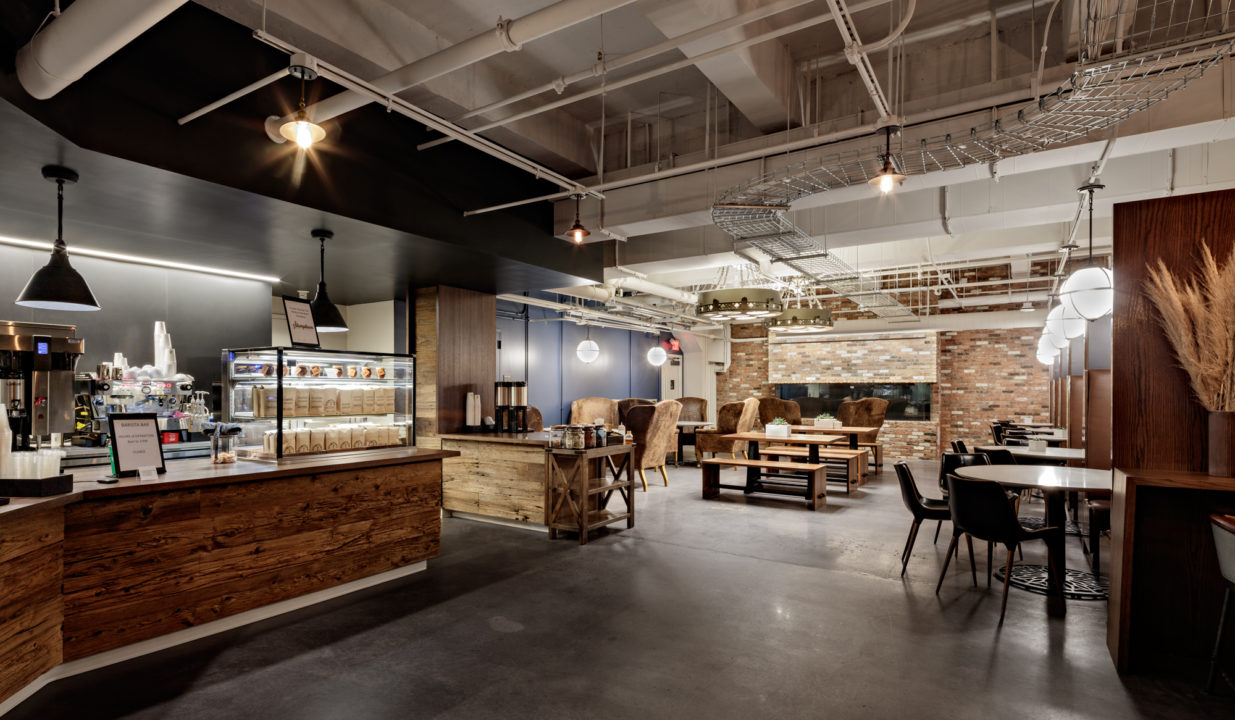 Upstairs, heading into the main church portion of the facility, you’re greeted by an archival exhibit anchored by a video screen showing Audible’s history, highlights and accomplishments. This display is flanked by quotes from both Audible founder Don Katz and his mentor, Ralph Ellison.

Making your way into the main sanctuary space,  the restoration and addition of the multi platform endoskeleton truly starts to shine. Due to the landmarked nature of the facility, the endoskeleton could not be attached to the exterior walls and is self supporting. 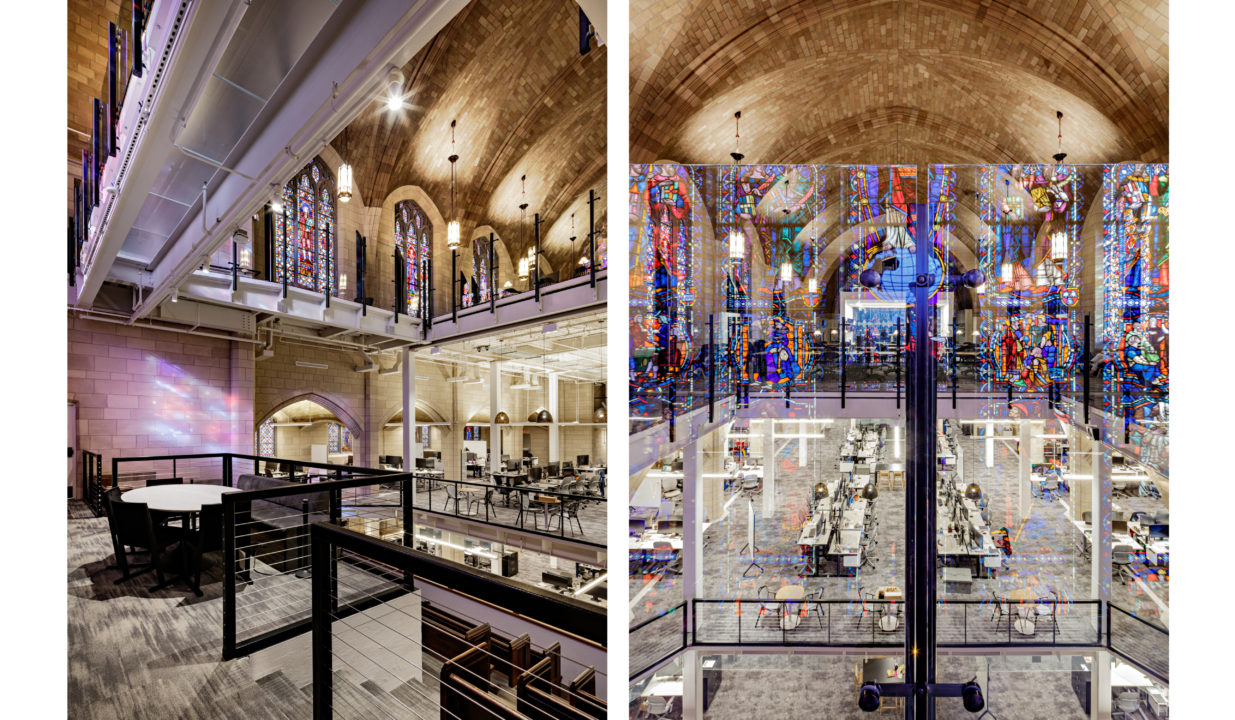 You look around and see the workspaces that surround this space and how it opens all the way up to the church’s groin vaults. If you’re looking for an alternative view, head to the second floor mezzanine and sit in the church’s original pews—preserved since its 1933 opening—and gaze upon the entirety of what has been transformed into a multi-functional, multi floored structure. There’s no way your eyes can avoid the beautifully restored organ (which will now play digital music) as well as the absolutely pristine stained glass window, which floods the space with beautifully multicolored light at various times of day. 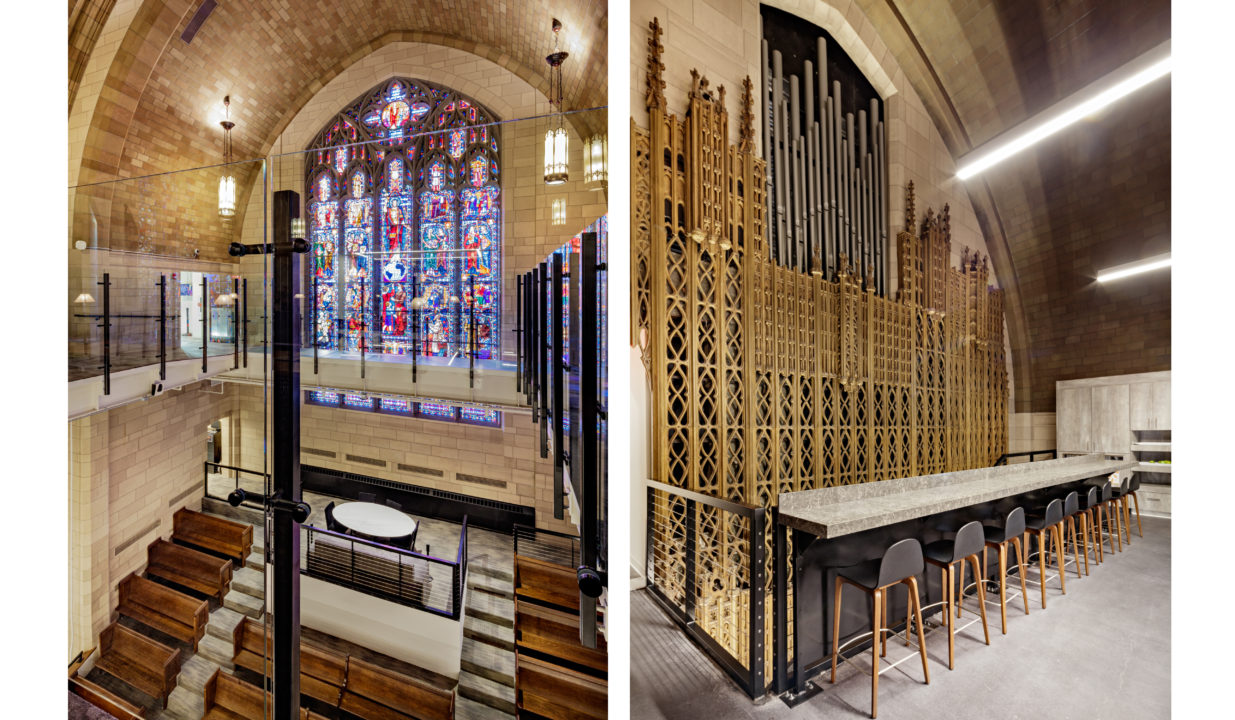 Nowhere is that latter point more noticeable than on the Library level of the sanctuary space, where the majority of the larger stained glass windows can be seen and the groin vaults are as close as you can get, with the arches starting to form at the edges of various workspaces. This space is demarcated at its peak by a singular juxtaposed modern conference room.

Now, just like any other deluxe edition audiobook, there are some notable bonus features in this building. In addition to the aforementioned bowling alley, there are fully operational men’s and women’s locker rooms on the fourth floor. They anchor another miniature workspace, surrounded by segments of the bleachers of what used to be this church’s gymnasium. 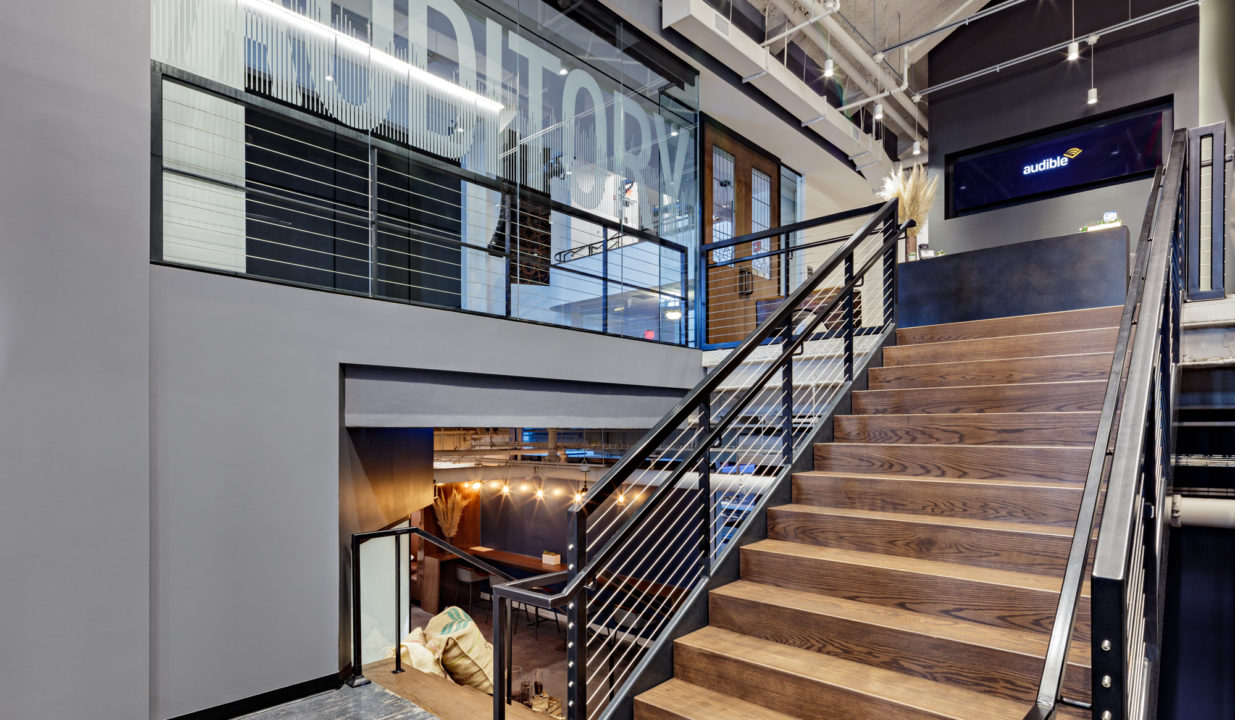 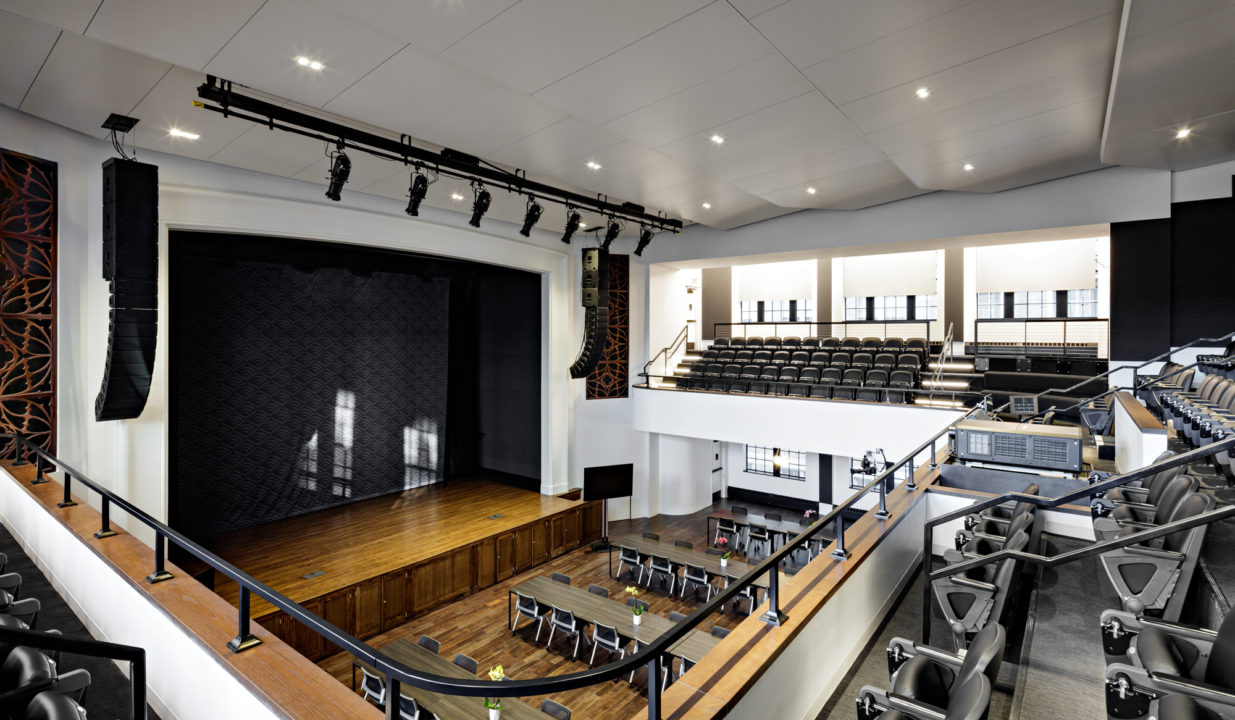 There’s also a bell tower with a fully operational bell. Audible may or may not let you climb it and ring that bell to your heart’s content, but that’s another story for another time.

In any event, the main story here is this: in partnership with Audible, Spector Group took a church that was central to downtown Newark, restored it to its former glory, and added to the history of a continuously developing city on the rise.

When you work for Audible, Spector Group has now ensured that you have the chance to both literally and figuratively be taken to church. 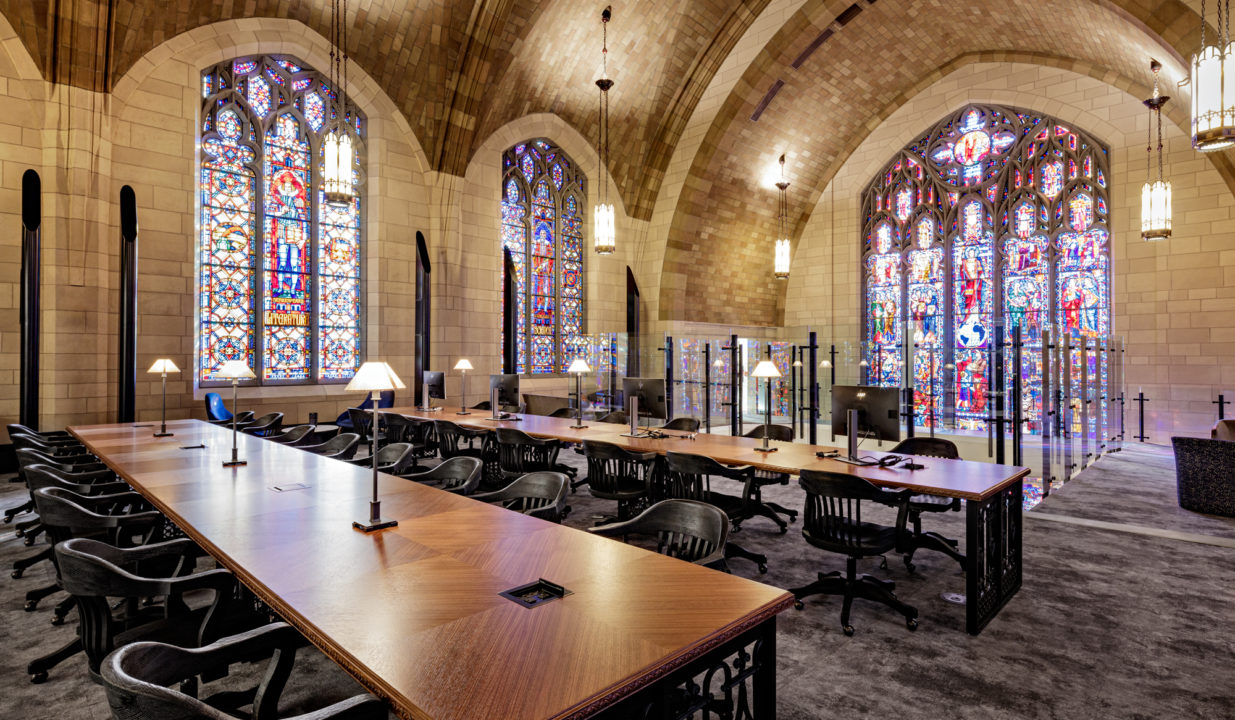 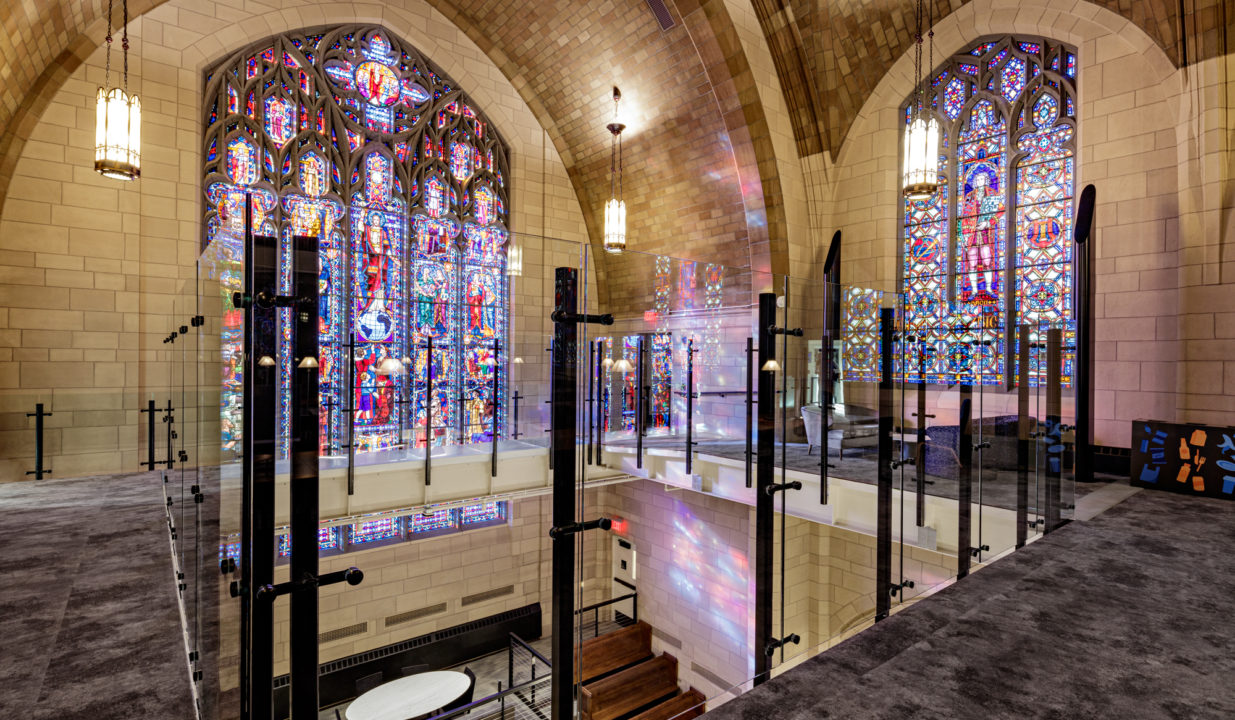 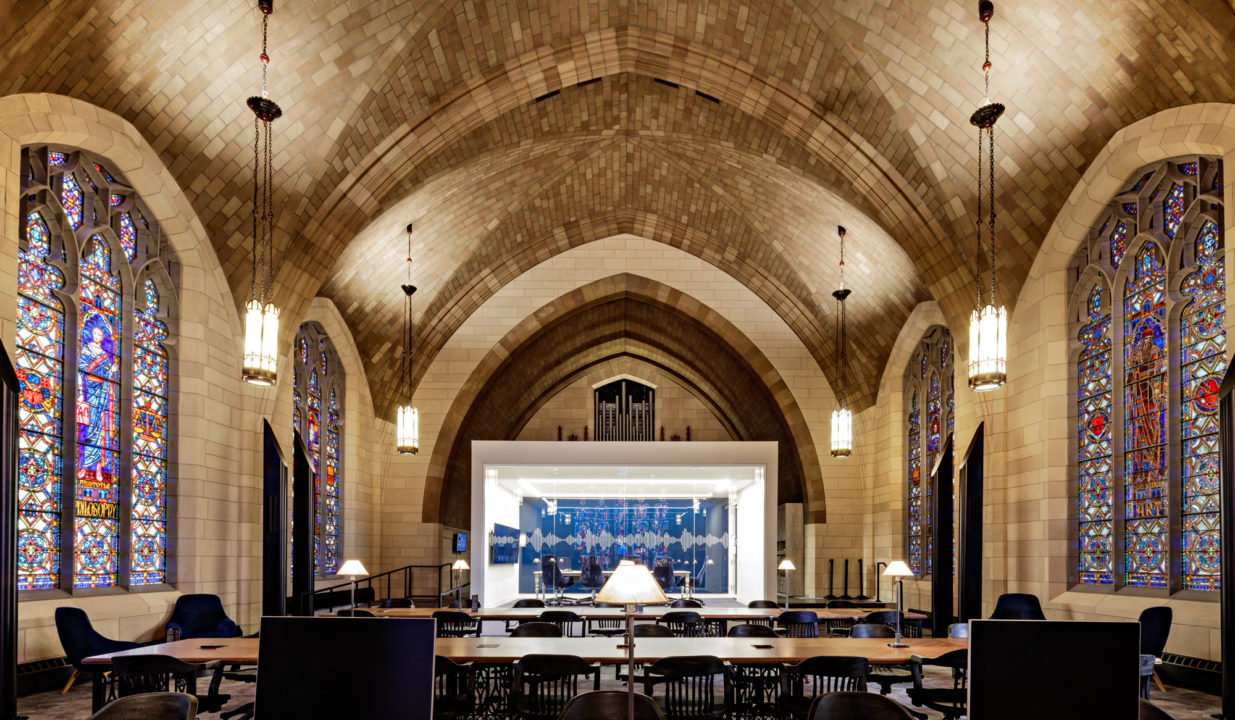 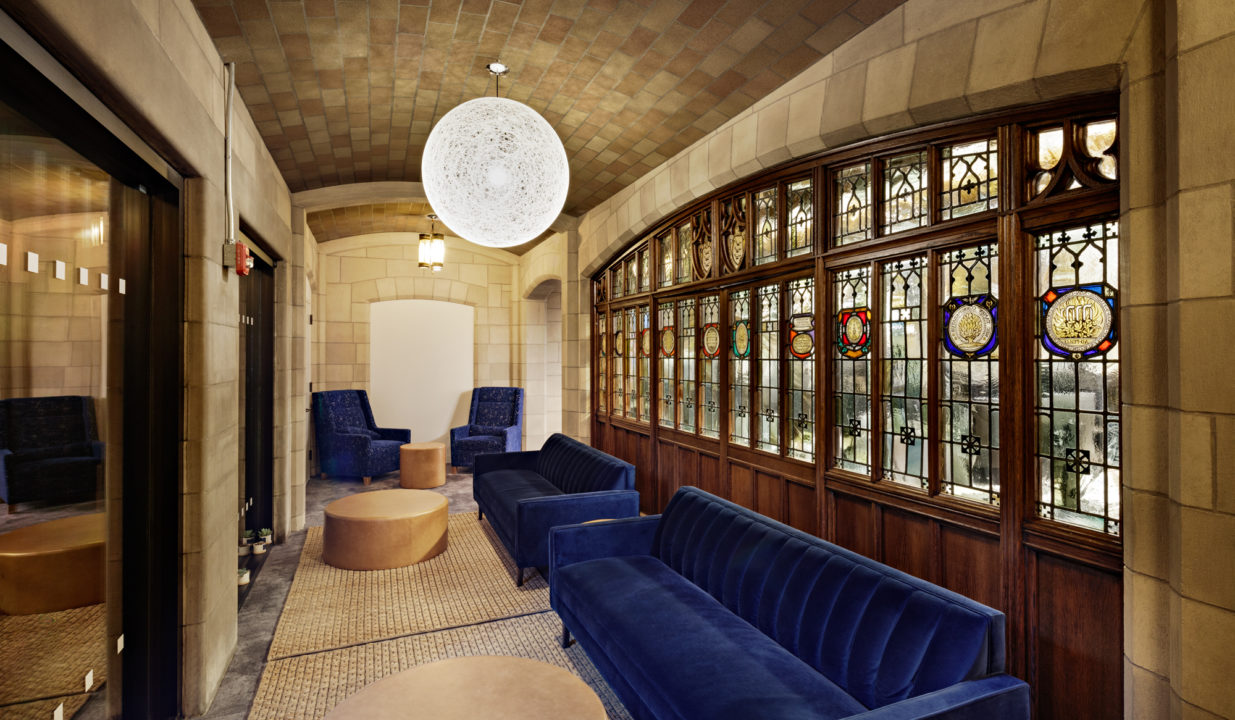 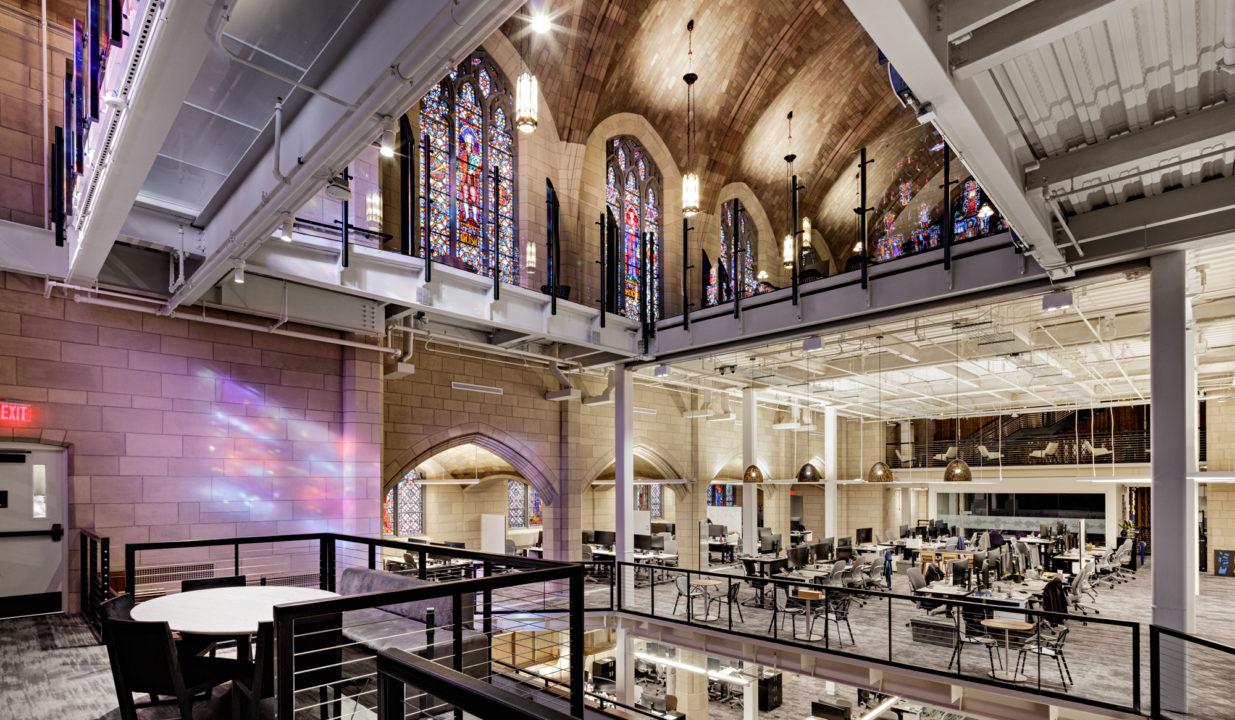 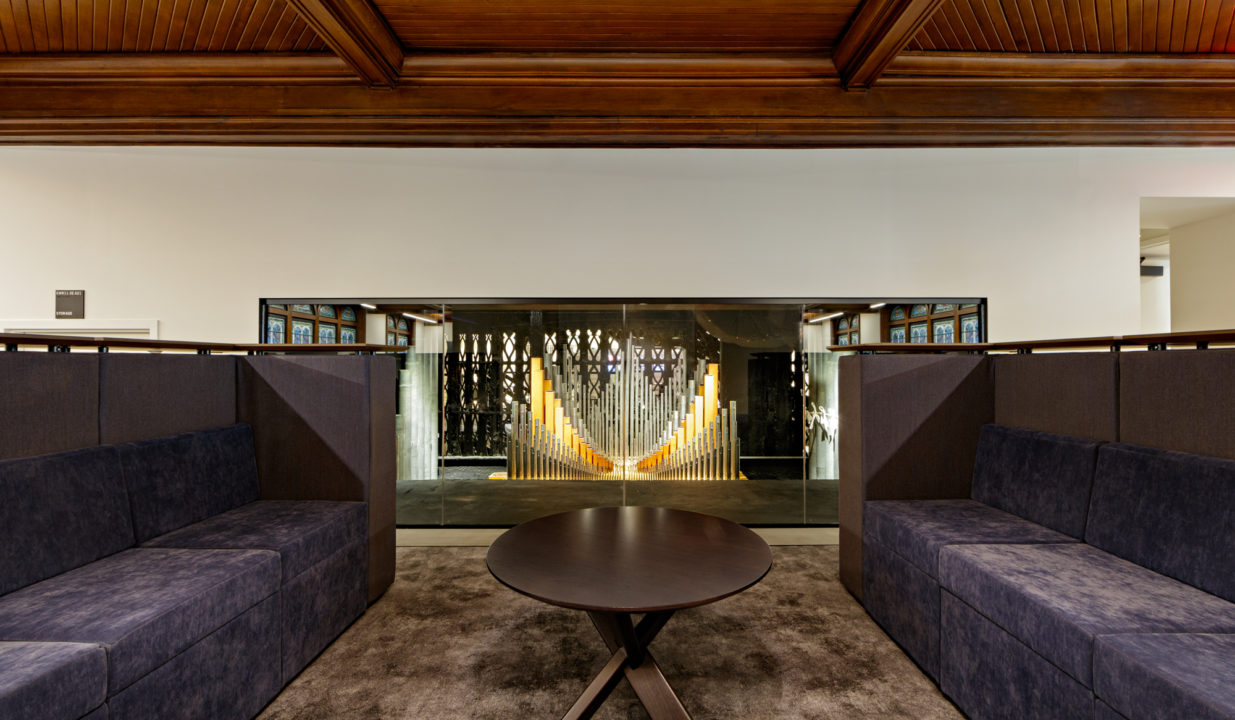